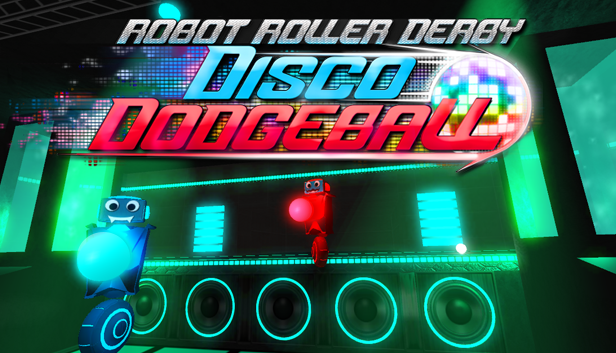 A Steam Early Access game, Robot Roller-Derby Disco Dodgeball is a multiplayer future-sport. I had you at disco dodgeball didn't I? So lets break it down: you race around skate parks / dance clubs in jet-powered robots and throw exploding dodgeballs at each other. Boasting a unique FPS experience with the game focus on core elements such as skillful movement and exhiliarating projectile combat with intense audiovisual environments. There are several game modes: Hoops, Super Ball, Demolition Derby and Classic Elimination as well as having a real Monster Truck Promo Announcer.

I had a chance to catch up with Erik Asmussen:

What was your inspiration behind RRDDD?

I wanted to recreate all the fun I had with classic multiplayer games like Goldeneye 64 and Mario Kart. In particular, I've always loved projectile warfare in games - there's just something intrinsically satisfying about lining up a shot from a distance, taking speed and trajectory into account, letting it fly and watching it connect with a target from across the room. It seems to tap into some very primal brain reward pathways.

First-person Dodgeball seemed like a perfect platform to combine all of these elements into something really interesting and different. I could abandon realism and experiment with colorful, futuristic environments. 'Ammo' becomes naturally scarce and valuable, making each shot a dramatic event. And there's also no blood or killing involved, which potentially makes it suitalbe for a wider audience.

How did momentum-based movement come into play?

It started as an experiment - I wanted to let players really feel that they were launching into midair off the skate park ramps. Additionally this helps balance the difficulty of long-distance projectile warfare by affording an amount of prediction to target movement. As soon as this was added, the whole game instantly clicked and the rest of the design fell naturally into place.

With up to 12 players in a room, is this team based play or 12 single players in a free for all match? What can spectators expect during a match and is there interaction between players and spectators?

You can have 12 players in a match either FFA or team-based. On smaller maps FFA will be pure insanity, but it can work on larger maps with that many players. I'm planning on building larger maps to better accommodate this many players. It's really up to the players and spectators. I've seen tournaments where the spectators are in the same game room and cheer on the players or commentate with in-game chat.

ETA for official release: maybe 4-6 months? depends a bit on how Early Access goes. One big component is I'd love to open up Steam Workshop so users can add tons of content to the game once it is released. If the game is successful I'd be happy to keep adding new modes and features even after the official release.

Available for Windows, Mac and Linux they are aiming to support the Oculus Rift and the Steam Box as development continues. Streaming, recording and posting of gameplay is encouraged, all they ask is that you don't just record the soundtrack as it is available to listen to for free as well as purchase from their Bandcamp page.

What kind of updates to game content can players expect once the game is launched?

I post a lot of my future plans on this forum page: http://www.reddit.com/r/discododgeball/comments/1qvhbd/the_big_disco_dodgeball_todo_list_thread/