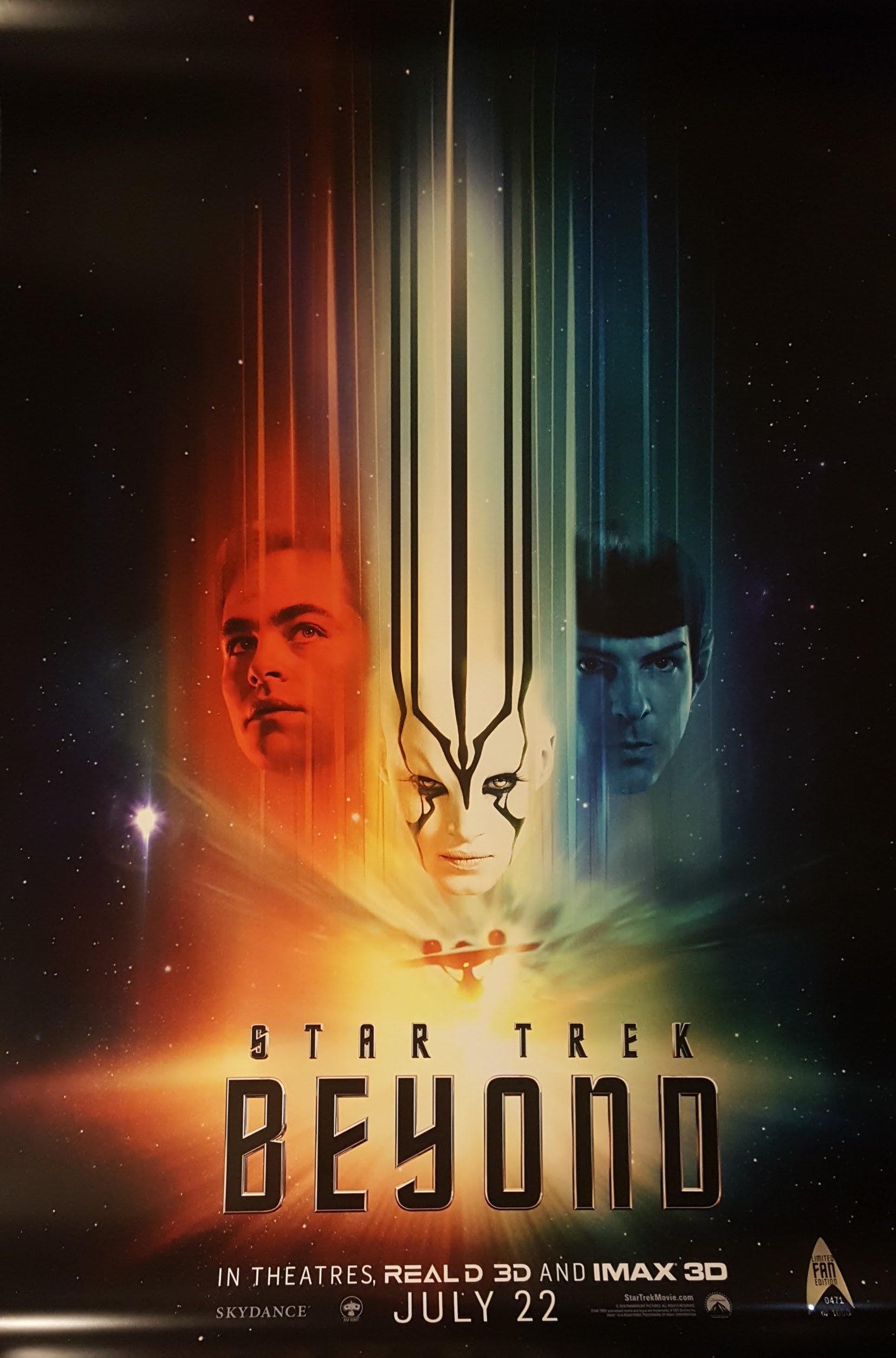 I walked into the latest installment of the Star Trek franchise with no expectations beyond the hope that my ICEE would be cold (by the way, it wasn’t cold enough).  I purchased my ticket, got my box of Buncha Crunch to snack on before the movie began, and waited for the show to begin with the hopeful belief that this film would be at least on the same level as Star Trek Into Darkness.

And even as I write this, I am still not entirely sure I know how I feel about the film.

The first fifteen minutes or so are fairly interesting.  Diplomatic events can usually be very dull, but with Simon Pegg as one of the writers you can be sure it will be funny.  In fact I would say this part of the film was the most true to the Original Stark Trek.  Kirk, standing before an alien leader acting as the neutral Third Party in some undisclosed dispute, is soon humiliated as the said aliens are too belligerent and take offense to him.  Seeing Chris Pine attacked by a swarm of aliens that are each no larger than a football reminds me of the silliness one would expect from Original Trek episodes such as “Shore Leave” (Season 1, episode 15) or “Friday’s Child” (Season 2, episode 11).

While the events on the surface have no real impact on the overall story, one particular item that was recovered during the whole ordeal will become the focal point of the entire plot.

We soon find that Kirk and Spock are not themselves, and for very good reasons.  Kirk, his birthday a few days away, is feeling disheartened at having outlived his father. Meanwhile off screen Spock has broken up with Uhura, believing that as one of the few Vulcan’s remaining it was his duty to the species to seek a mate with a fellow Vulcan. He is soon hit with the second blow of news that Ambassador Spock (Leonard Nimoy’s future Spock) has died.  As a side note, it is amusing to see a being that is 162 years old die just 33 years after his birth.

I won’t get into the actual plot of this movie except to say this; you make no god damned sense.  Especially the 4th Act space battle…..just…no.

The actual acting from everyone involved was spot on. I really felt like Karl Urban was “Bones” McCoy, or that John Cho as Sulu is both strong and funny.  But what the film really needed was to focus them.  At the conclusion of the second act, the crew is scattered into groups of two, which leaves a lot of potential that is lost.  Kirk and Checkov barely speak to each other. Uhura and Sulu are usually apart – with Uhura being used as an exposition piece that explains nothing (why is she being shown everything by the bad guy? He isn’t supposed to be a comic book villain).  However the combination of Spock and Bones is so humorous I really just want a solo movie with them.  I would pay to watch two hours of Spock and Bones trying to survive on an alien planet “Castaway” style.

What really irked me is that the antagonist, Krall, played by the wonderful Idris Elba, isn’t fleshed out.  His motivation seems thin, even after the “big reveal” that doesn’t feel much like a reveal at all.

At the same time, the key component from that opening act is revealed to be part of a doomsday weapon that is never really explained.  They kept calling it a “bio weapon” but visually it looks and acts more like the nano weapon from 2008’s The Day the Earth Stood Still.

And the heroes, especially Uhura, continue to triumph the strength of Unity the Federation has while forgetting showing us how the actions of individuals win them the day.  Did Dave of Engineering or Nurse Miranda do anything to help the situation? No they and about 150 other people spend most of the film being hostages, victims, or forgotten set pieces.  It is the actions of 8 people that have any impact on the story.  You can’t say the Federation is great for being so inclusive, while having everything resolved by an impossibly small number of people, of whom six are Human, one is a Vulcan, and the last one is never given a name.

And while Krall’s story is really…abandoned and unexplained, I am most left wishing he had succeeded as the man has a point.  Krall believes that challenges, adversity, strife, make you stronger.  And from his perspective, he is right. After the Not-So-Big-Reveal that the audience sees coming a mile away, we learn a LITTLE about his past.  And unless you are a major nerd of Trek lore like I am, you wouldn’t have any idea of how impactful that is.  And at the same time, he is right.

How about a little perceptive?  The largest “set piece” in this movie is the new “Yorktown” space station.  It is a MASSIVE space station, the size of a small moon, and looks as “fragile as a snow globe” to quote Bones when he first sees it.  Think of the purpose of the Citadel from Mass Effect, combined with the outward appearance of the massive glass…thing…that Dr. Manhattan built on Mars in Watchmen. That is what this station is.  Then, remember that this thing sits on the frontier of explored space.  Not Federation space, but explored space.  So this colossal work of engineering doesn’t even have direct Starfleet support.

If that isn’t an act of hubris on the part of Starfleet, I don’t know what is.

Anyway, I got off track.  By the end of the film everything has been wrapped up in a bow. Kirk’s despondence is addressed and overcome, Spock is dating Uhura again, and we are left looking at a new Enterprise ALREADY being constructed three days after the previous one was destroyed.  Which, I think brings us to the Enterprise A…I think. We still don’t know if the Enterprise from the previous films was repaired or written off.  Considering the damage in the previous movies I would have expected them to build new ones but you never know.

When the credits began I left the theater amused, entertained, and very much confused as to why. The plot had massive holes, the acting was great but only came in small amounts, and the action was both smart and stupid at the same time. Why did I like this film?

Maybe I liked it because, even with all its faults, it actually FELT like an episode of Star Trek.  Since the new films began and the timeline was split, the movies have been very technical affairs that furthered the old trails left by Star Trek and did very little new things.  But this movie somehow felt like I was watching Original Star Trek, or Next Generation.  It was silly, with a weak plot, but it was high entertaining.

Side Note: Jaylah (Sofia Boutella) and her makeup.  Can we get Earth women to have milk-white skin with awesome ink face paint/tattoos?

Side Note #2: Why are 3D glasses not designed to fit over regular glasses yet?  Come on people!